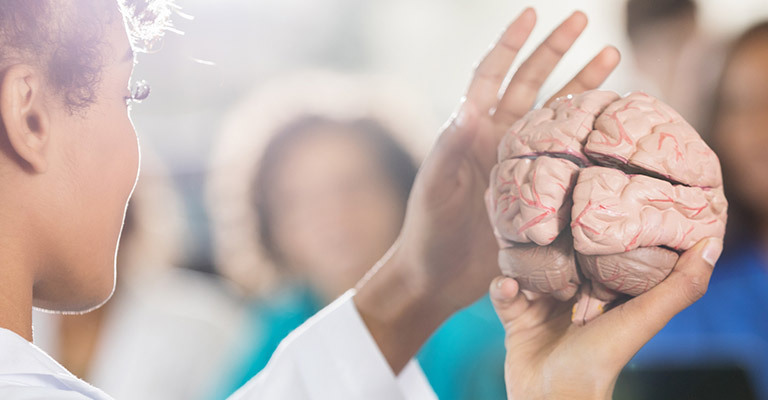 At the end of the previous century, scientists made the amazing discovery that the brain changed its structure with different activities, perfecting circuits so that performance could be improved. They called this fundamental brain function 'neuroplasticity'. The word 'neuro' comes from the word neuron, that basic structure in our brain and nervous system which conducts the information via electrical charges, and the second word, 'plasticity' comes from the word 'plastic,' material which may be shaped when soft and then hardened to retain the given shape.

As a result of highly sophisticated, non-invasive technology, scientists are able to study the brain in real time and have come to understand how the learning occurs. The brain receives the information via the senses. The brain changes as a result of the input from the world.

The question thus arose. If the brain is changed by exposure from the outside world, how can knowledge derived from neuroscience assist us in teaching in the way that the brain learns optimally. If this is vital for children who have no difficulties in learning, how much more important is this knowledge to address the learning difficulties for those children and adolescents who have specific learning difficulties, such as dyslexia, language-related difficulties, dyscalculia, attention deficit hyperactivity disorder, and those numerous students who are not achieving and making the progress expected of them.

To address the difficulties of these learners, the Turnabout Programme was developed. During the course of a couple of decades, there have been many children, adolescents and university students who have been helped and have gone on to be successful in school, but most importantly, in their lives.

The Turnabout Programme; non-linguistic and non-computerized is based on knowledge from neuroscience. It builds a brain that can sustain learning by focusing on the storage and retrieval of information within the memory networks. As the brain responds to information via the senses, this programme integrates visual and auditory memory processing exercises which create neural circuits necessary for fluent reading and comprehension. The exercises are structured, increase in difficulty to improve procedural memory essential for coping with large amounts of information necessary at all levels, from the elementary to advanced levels.

The activities to improve auditory processing skills enable learners to access learning through phonics tuition and the activities for improving visual processing skills enable speed of processing information visually. The impact of the simultaneous development of these skills is that within three months of Turnabout training, learners can make substantial progress in their literacy skills and they are able to retain that which they have learned. This is reflected In Increases in reading age of two, three and four years following three months of Turnabout activity.

The Impact of Music

One of the more exiting aspects of current research relates to the positive impact of music on the brain. Within the Turnabout Programme there are specific activities utilizing music that enhance the 'focus of attention' and help learners who have ADHD characteristics. Music enables the 'emotional brain' to respond with dopamine, a neurotransmitter necessary for learning and remembering. In addition, music develops timing, sequentially and speed.

Much of the current research and the findings are very accessible for anyone who seeks to know more. Within Turnabout Education we are confident that the development of this programme over the last two decades is fully substantiated by the most recent research.

It has been widely recognised that anxiety and a deficiency in self esteem can restrict the blood flow to certain parts of the brain and this can inhibit learning. The freeze, flight, fight characteristic is a deeply ingrained response and there can be other physiological reactions brought about by the stress. To combat this, activities that develop and enhance self-esteem are comprehensively embedded within the whole of the Turnabout Programme.

Find Out More About Turnabout

We will be very pleased to respond to requests for further information; to advise schools how to implement the programme and to explain the outcomes that can be expected.